Pressed for time? You can get Njoy Pure Wand here.

If you researched it at all, you’d see every sex blogger under the sun singing praises for this toy.

You’ll find out all about it in this Njoy Pure Wand review.

I’ll have to admit – I was a bit afraid of testing out this toy.

Just look at it – it looks so big and intimidating. I was a bit scared of having that big chunk of metal stuck inside of me.

I mean, c’mon… there’s no way any toy could live up to that amount of hype, right?

Oh, how wrong I have been.

Pure Wand met and exceeded my expectations, and I’m going to share all my findings with you in this review. 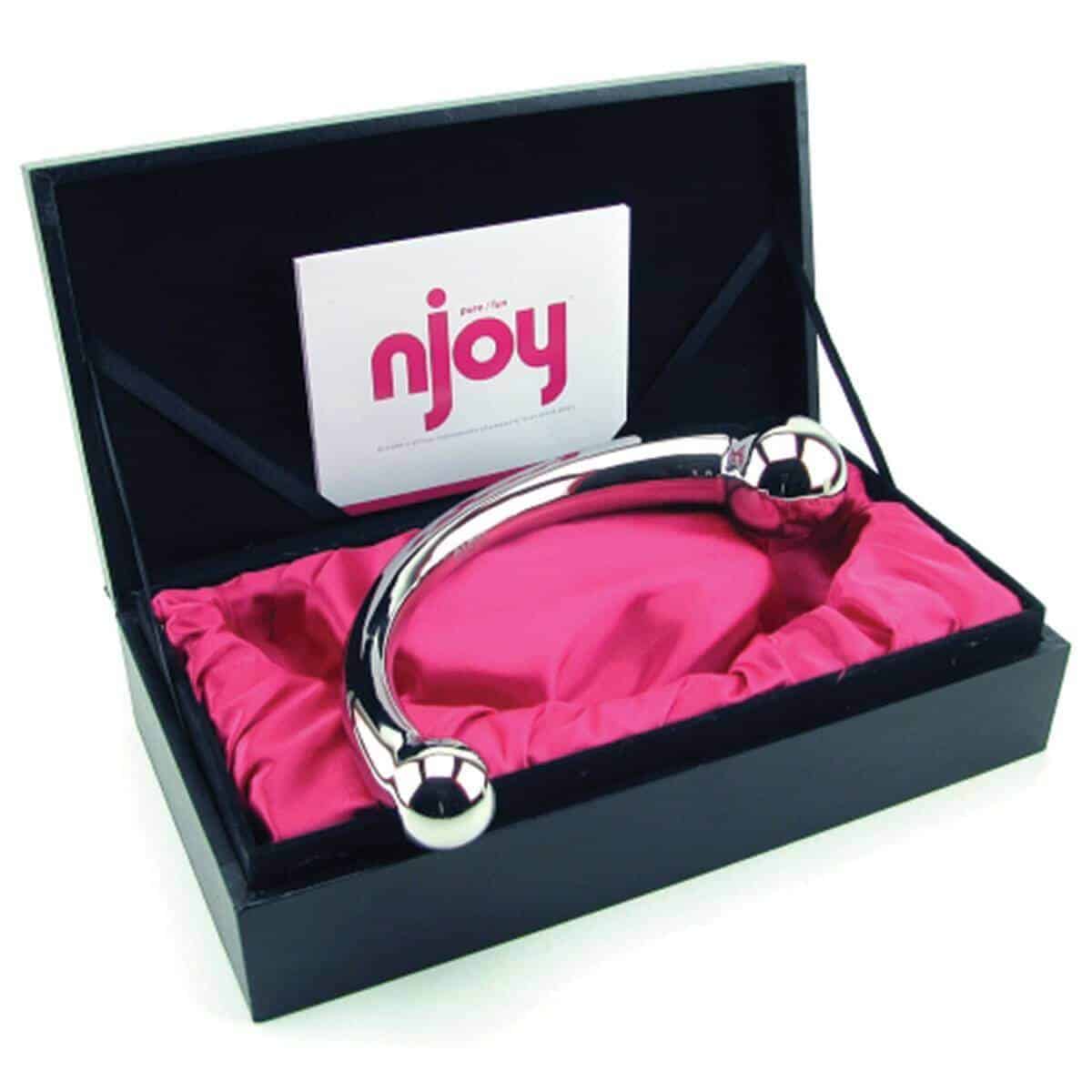 One of the advantages of high-end toys is that they come in gorgeous packaging, and Njoy Pure Wand is no exception to that.

I’ll be honest: I don’t usually care about the toy’s packaging. In 99% of the cases, I’m going to rip it up and go straight for the goods.

However, when you have a luxurious, satin-lined box, you just don’t do that.

The outer sleeve is a plain white box with njoy written on it. When you take the sleeve off, you’ll find a sleek black box with a silver “njoy” inscription. The box itself feels sturdy and well-made and I’ve been using it to store my Pure Wand ever since I bought it. The toy lies on a pink pillow inside of a black box. Besides the Wand, inside the box, you’ll also get an informational booklet.

I’ll have to admit: the whole thing unpacking experience feels classy and adds to the anticipation. But that was nothing compared to the feeling I got when I took the toy in my hands. 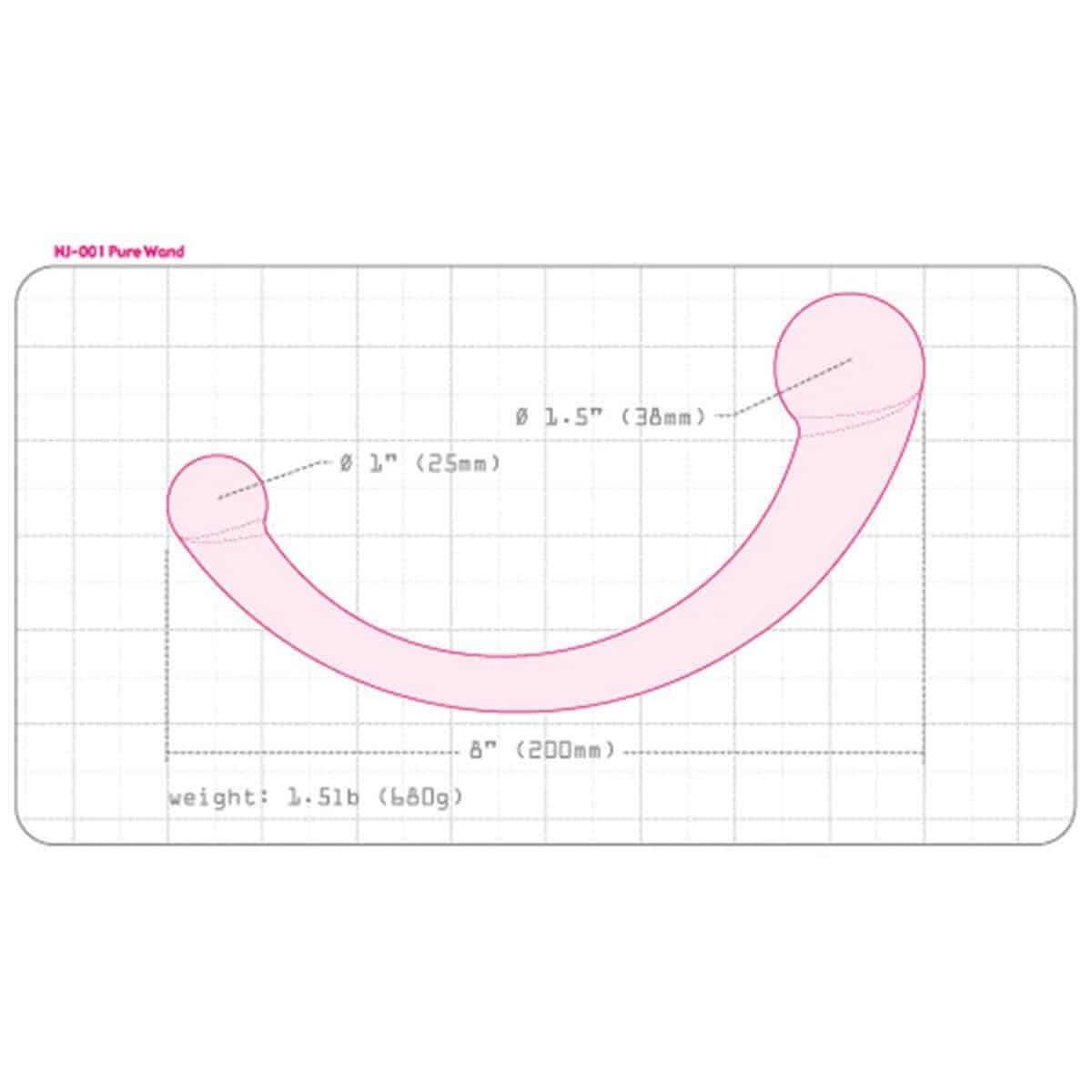 Let’s start with the basics.

Njoy Pure Wand is made out of medical-grade stainless steel. Not only does it make extremely visually appealing, but it also makes it super easy to clean. Just pour some boiling water over it and you’ll be done in less than a minute. Soap and water work just fine as well. And, it goes without saying that the material is 100% body-safe, hypoallergenic, and non-porous.

The whole thing is perfectly smooth and polished. When you combine it with some lube, this means that this toy will easily slide in and out of your body. Njoy Pure Wand is slick, hard, heavy, and can handle temperature changes extremely well (more on that later). 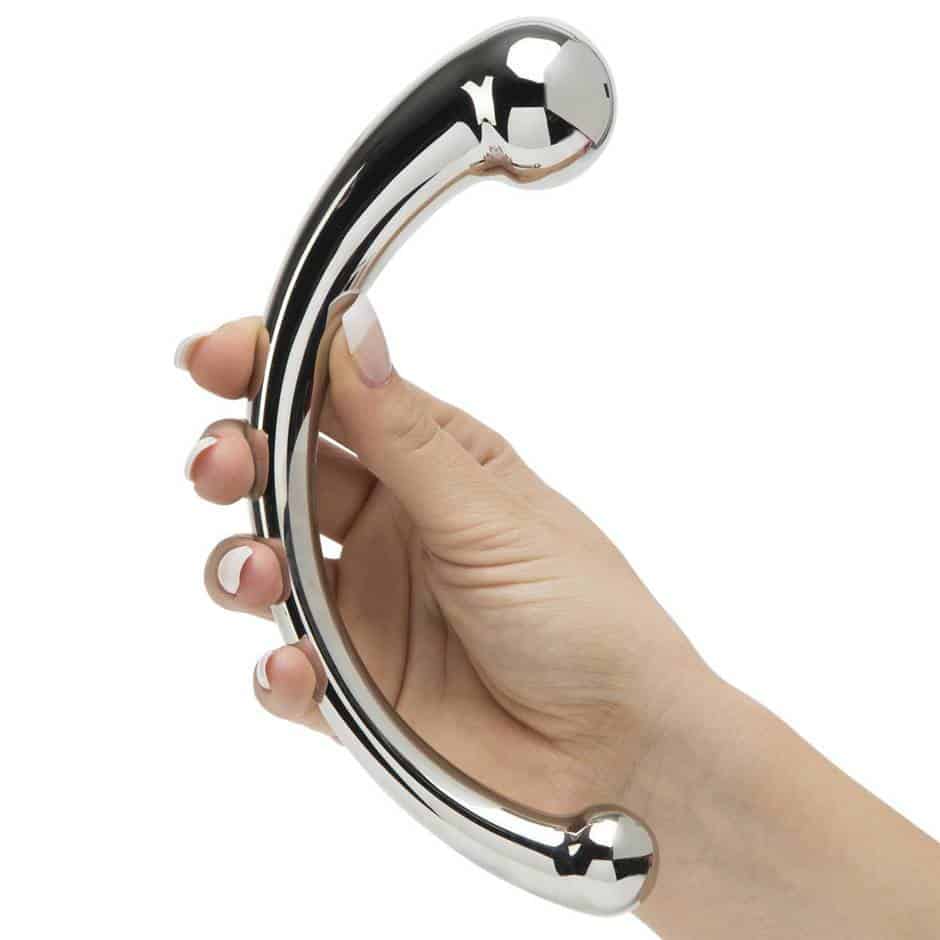 Ok, so those were all the specs and details about this toy.

Let’s now get into the nitty-gritty of using and orgasming from this bad boy, shall we?

How To Use Njoy Pure Wand

Where this toy shines, however, is its amazing ability to get almost anyone to squirt – yes, even the lifelong non-squirters. But, I do have to admit that there’s a bit of a learning curve.

The trick lies in pointing the bulbous end towards your navel and then rocking the wand back and forth. This motion massages your G-spot and builds up arousal, leading pretty much anyone to a toe-curling orgasm.

Remember: rock the Wand back and forth, not in-and-out. 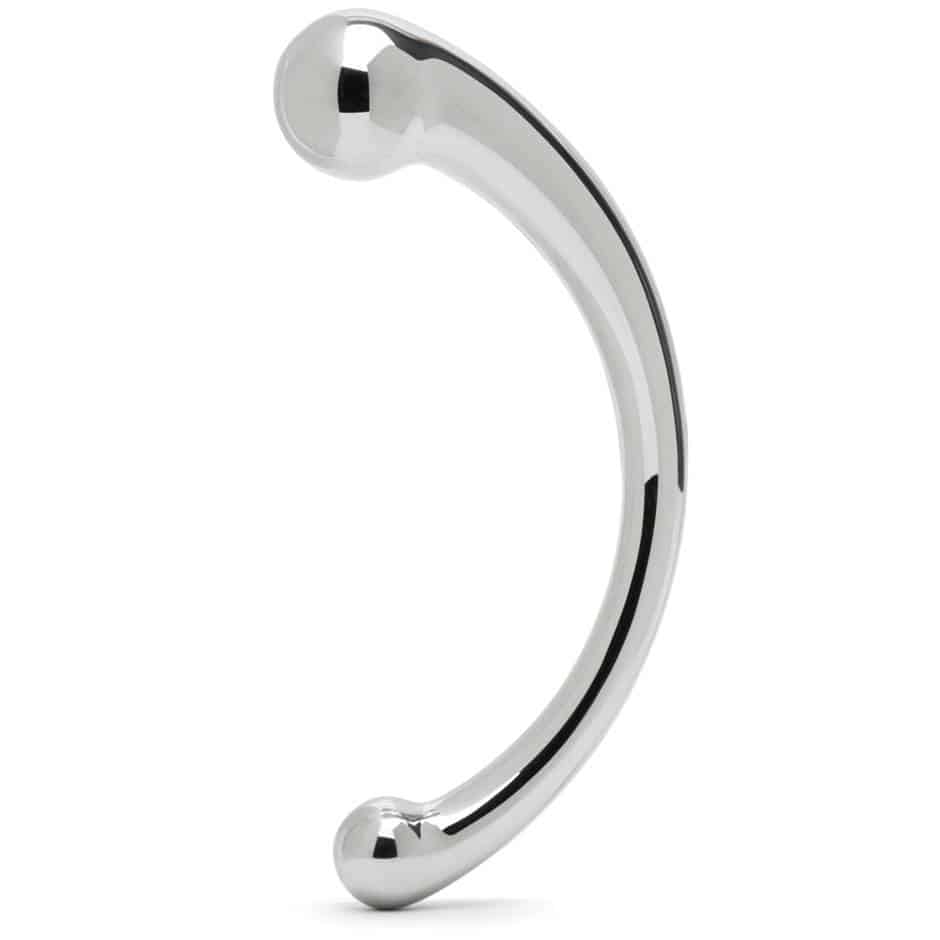 I recommend starting with the smaller bulbous end first, then switching to the bigger end once you’re all hot and bothered. The reasoning behind that is simple: if you start with the bigger end immediately, it’ll get too intense, too fast. Some toys are made for quick and easy release – the Pure Wand is not one of them. This is the toy that will wine and dine you and take its time bringing you to climax.

Now Njoy Pure Wand is not all sunshine and rainbows. If I had to point out one flaw, it would have to be the fact that this toy is definitely more geared to self-love, and it’s not ideal for couple’s play. Considering the finesse required in operating it, you and you alone will know exactly how much pressure to apply and where.

I’m not saying you can’t ever use it with your SO, but I recommend you first learn how to bring yourself to orgasm first, then include your partner in the play.

What do I mean by that?

It’s quite simple really – since they are made out of metal, you can heat them up or cool them down and then use them. This allows you to significantly alter the sensations you’re feeling and add a new dimension to your bedroom play.

Of course, don’t go rushing in and put it in an oven or something. That won’t end well.

For added pleasure, you can keep one end of the Pure Wand in the hot water and the other in the cold water. Then, use the hot end first, then switch to the cold end. Then hot end again. And so on. Doing this will give you the most intense G-spot orgasms you ever had – it did that to me at least.

Maybe it’s the high price tag that is putting you off. It could be the size.

Whatever the case, this review would not be complete if I didn’t mention some alternatives to njoy Pure Wand. 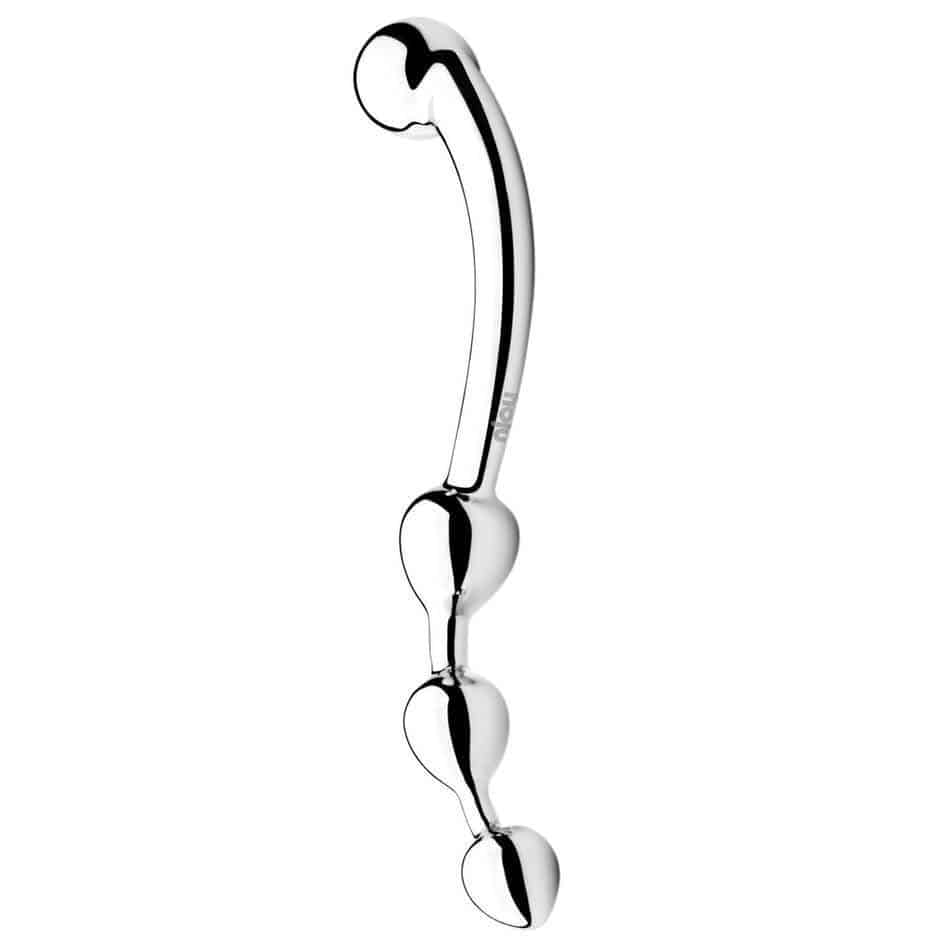 There are two main complaints about the Pure Wand: its price and its weight.

Njoy Fun Wand solves both of those problems. Think of it as Pure Wand’s smaller, cheaper cousin.

The Fun Wand design mimics the intuitiveness of the Pure Wand but at half the weight. So if you were complaining about wrist pain, this baby has you covered. 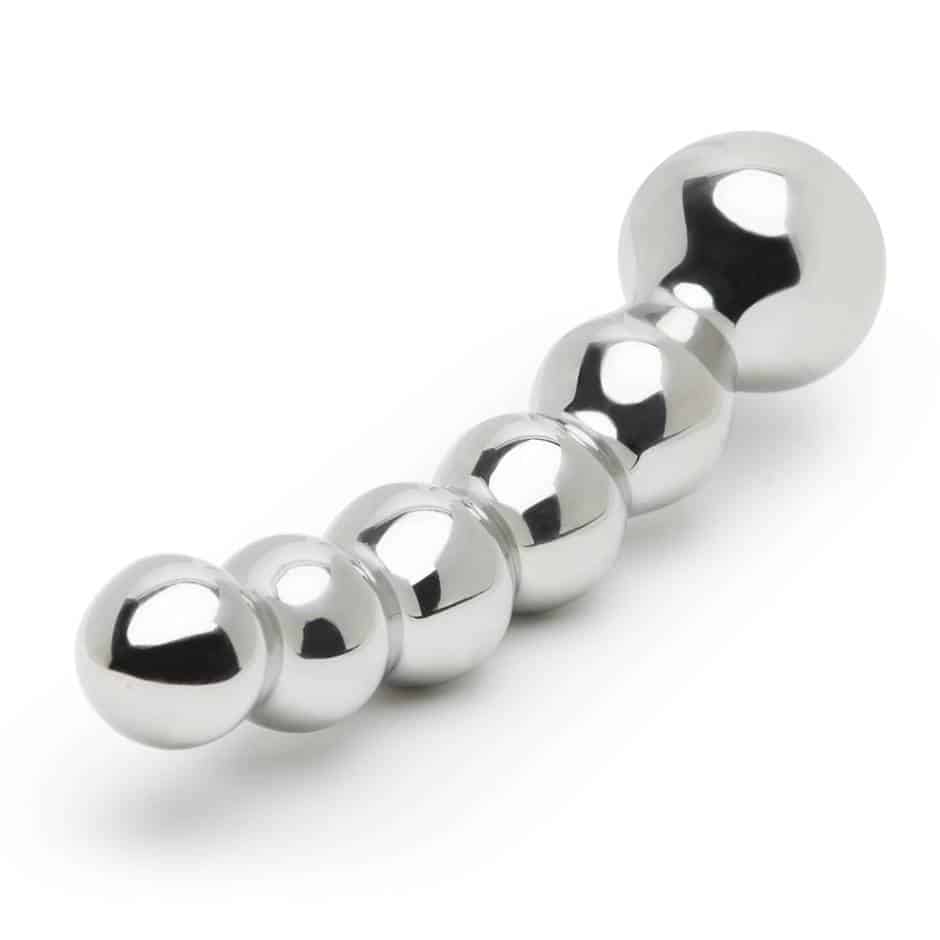 Maybe the Fun Wand is still too pricey for you.

Fine – I’m certainly not the one to judge.

What drew me to it was the fact that even though it’s shorter than the Pure Wand (6.5 inches of insertable length), it’s even heavier at almost 2 pounds. This is perfect when you want something weighty and firm to play around with. 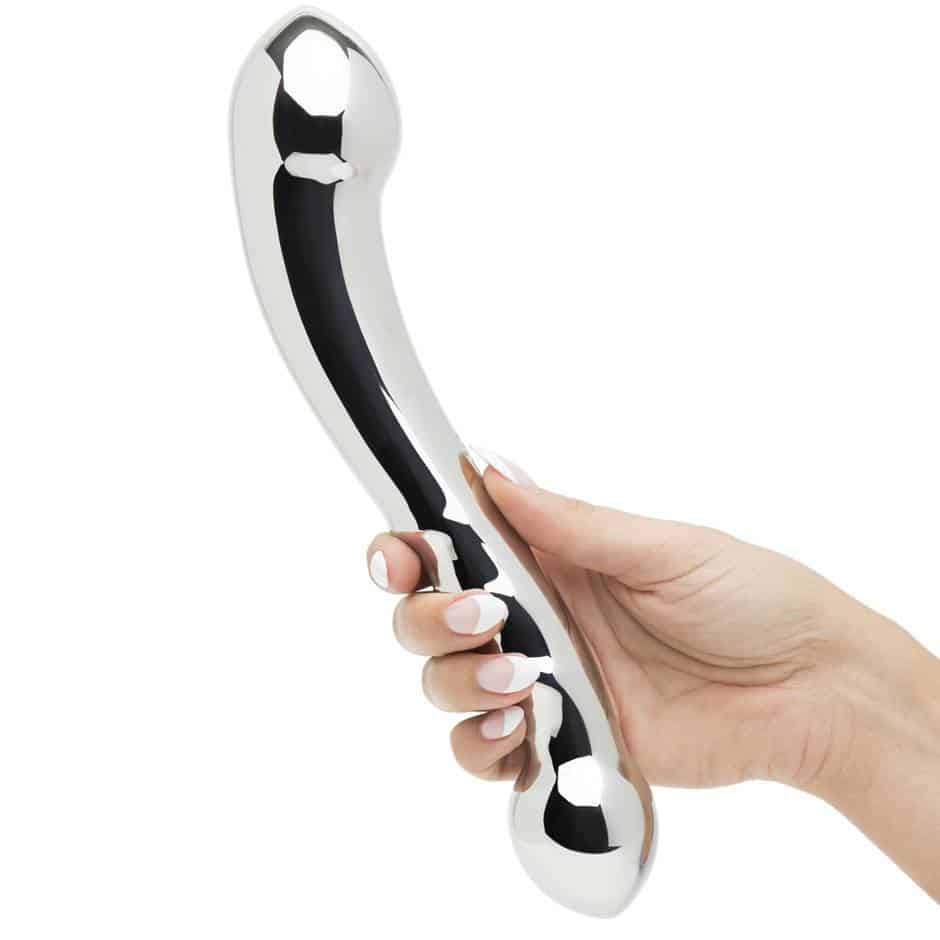 Going back to the Njoy family, we have this monster called Njoy Eleven.

I can think of a few reasons to choose this toy over Pure Wand:

But seriously though – this toy is big and expensive.

With an insertable length of 9 inches, this thing looks and feels big. Very big. Oh, and did I mention the 6.5 inches of girth? …yeah. This toy is not for beginners.

That shows in its price tag. Almost 3 times more expensive than the Njoy Pure Wand, this toy requires an experienced user and a big wallet. Tread carefully.

I’ll keep this summary brief and to the point.

You should get Njoy Pure Wand if you:

You should probably avoid it if:

Overall, I give it a 9 out of a 10. I took one point off since it’s not that cheap and you might have to save up money for a month or two.