Do Your Boyfriend And You Have Nothing To Talk About?

I was talking to one of my friends the other day when she suddenly told me “my boyfriend and I have nothing to talk about.”

They’d been in a relationship for five years and she was devastated that this meant the end was near.

But when you’ve been with somebody for that long, running out of topics is completely normal. It doesn’t mean your relationship is over. It just means that, just like in any other relationship, there are bound to be ups and downs.

It’s a scary thing to happen.

You’re incredibly close to this man, he probably knows everything about you and you’re able to tell him absolutely anything. And now suddenly, there’s nothing to talk about.

You may even start worrying your boyfriend’s losing interest in you.

You’re not alone in this. Many people experience the same crisis at some point in their relationship. But it’s a crisis you can overcome and come out of it stronger.

You just need to know how to deal with it in the right way, without panicking or writing your relationship off too soon.

Here are the best strategies to improve communication once you notice you and your man have nothing to talk about.

Let’s start with the obvious one.

Before you say my boyfriend and I have nothing to talk about remember the last time you actually showed interest in his life.

Even if your life’s in a rut right now, maybe you need to let your guy talk more.

However, men are usually not as open as us when it comes to communication. They want to talk to us, but they need a little push.

So, ask him questions about his day, about his work, hobbies and friends, and spice it up with some interesting, hard-hitting questions that will spark up completely new conversations.

Write down what you want to tell him.

How many times has it happened to you that you sit at work, talk to your friends or just walk down the street and something cool happens that you want to share with your significant other?

But then by the time you see each other, you forget all about that little detail that might have turned into an interesting topic of conversation.

Next time you think “I have to tell him about this,” jot it down on your phone immediately. Just a couple of keywords will remind you to share your fun story with your boyfriend.

Start doing something new together.

After years together, the relationship can wear out. You already know pretty much everything about each other and you’ve covered every possible topic of interest during the years. Just talking about how your day went can quickly become boring.

That’s why you need to think out of the box and not just come up with new topics you could talk about, but find new shared interests – and do them together!

Start exercising together, take a dance class or learn a new skill together. Believe me, if you find something you both like, you won’t be able to shut up about your new passion.

Take a break from talking.

You don’t always have to talk when you’re with your boyfriend. Sometimes you can just sit quietly and it can mean more than a thousand words. So don’t worry, silence is not always bad.

Take a break from talking and have a fun night together. Watch a movie, play a game or try out some new tricks in the bedroom.

All these things can work much better than a conversation to bring you closer together and help you build a healthier relationship. Learn to embrace the silence and just enjoy each other’s company. 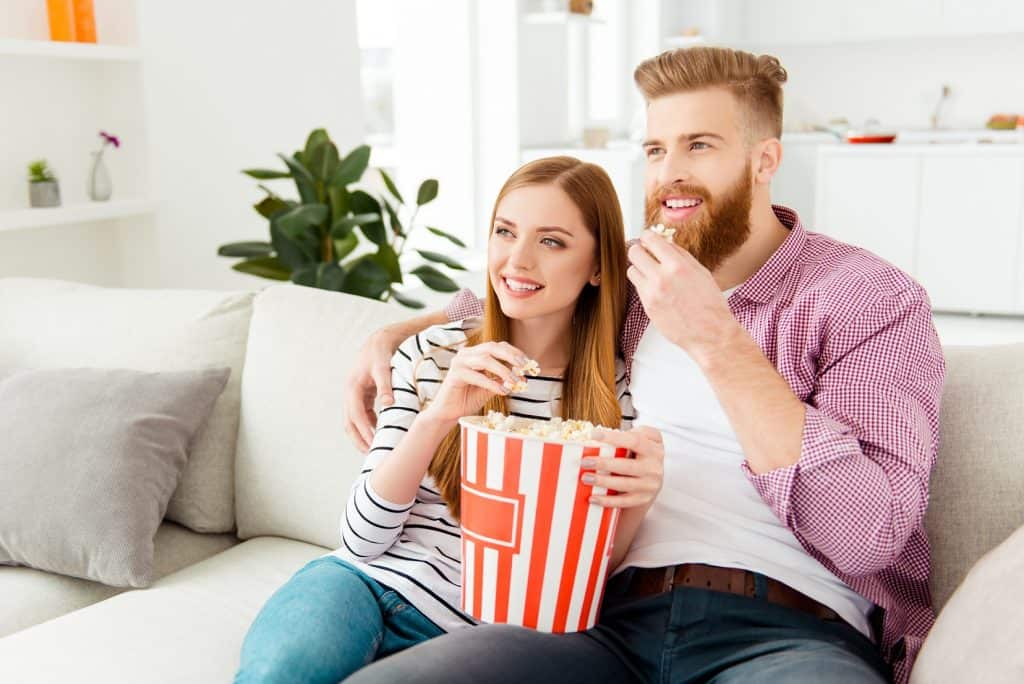 Reminisce about the past.

Reminiscing about the past is a tactic that always works, especially if you feel like you’ve started growing apart.

Remember when you met and how you used to be then. What drew you to your partner? What did you use to do for fun?

Go down the memory lane together. Ask your boyfriend what he thought when he first saw you, what he liked about you then and what parts of your early relationship he misses the most.

Then turn that reminiscing into something productive and try to figure out a plan to bring back some of the cool things that first brought you together.

More often than not, this is the real problem. You guys haven’t run out of topics to talk about. Instead, you’re doing all the talking and he barely participates.

The conversations in a relationship should be two-sided but sometimes men are just not in the mood for sharing. That doesn’t mean he’s not interested in what you have to say and it definitely doesn’t mean he doesn’t love you anymore.

Tell him about your day, and just let him listen. And if you need a reaction, ask him for advice or his opinion on something you’re going through.

When we face a communication problem in a relationship, the situation can quickly take a turn for the worse. Even when you have a conversation, it can turn into nagging, blaming and fighting.

We often get caught up in everything bad happening around us and it’s easy to focus on the negative. But teach yourself to look at the bright side and practice saying something nice to your boyfriend almost every day.

Tell him why you love him. Thank him when he helps you with something. Say you appreciate him.

It will mean the world to him and he’ll probably become more positive, too.

If you and your boyfriend don’t have anything to talk about, it’s not the end of the world. It’s just a small bump on the road, and it’s definitely something you’ll get through if you make an effort.

Practice using these methods and see which ones work best for you and your man. You’ll be back to your old chemistry in no time.

Sometimes all it takes is a few words in the right timing to get him to talk and want more.

What do I mean?

Talking to your boyfriend with the same small talk of “How was your day” “What did you eat” blah blah… can be super boring sometimes.

You probably know what am I talking about.

Imagine instead of it, you throw a dirty line to the conversation.

What happens then? How will he react?

If you want to know how to implement those desires in his head and keep light the spark in your conversation again. Dirty talking is definitely for you.

I wrote ALL you need to know about it, with real life examples and step by step on how to speak your desires elegantly and get what you want without boring him out.

In fact, he will be surprised more than you think.

*Spoiler – this will get you a lot of score from him subconsciously from his side.

You will become much more confident and able to get what you want simply by using the right words at the right time.

Dirty talking is not just another bad word, It’s a strong weapon that must be used wisely. 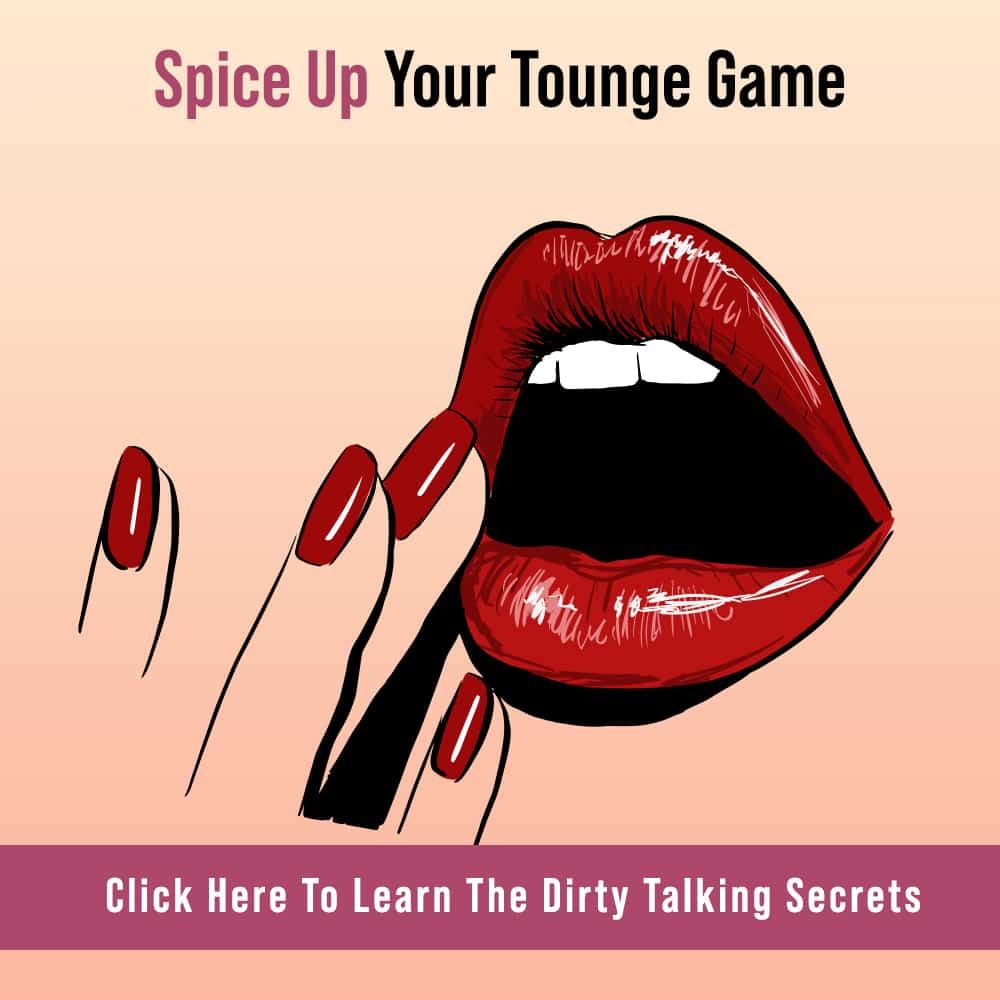