How To Keep A Guy Interested After Sleeping With Him

So you’ve slept together…

And it was good – much better than you expected.

Now you’re starting to worry. How do I hold on to this guy?

We don’t like when somebody tries to box us in or limit our freedom.

But sometimes we know that we have to make compromises, or that doing things together just makes better sense.

My advice to you?

Don’t rush in to dominate his personal space, whether it’s his home, mind or heart.

Clean up after yourself when you visit his place. Don’t try and change his mind with your ideas of the world. Give him the space to fall for you – don’t push him.

Pay your own way as much as possible. Hold steady with your principles and ideas. Let him know you’re not a pushover, and willing to give up on your beliefs so easily.

Ideally, you want to create a situation where he comes up with the idea to move closer to you, or move things forward with you.

If you try and force it, he’ll pull away.

When a man feels like it’s his decision, he’ll usually be more open to taking things to the next stage with you.

2. Display The Best You

At this early stage, you want to do everything possible to keep a guy interested after sleeping with him.

This means that you’ve got to put your best foot forward – at all times.

Start with your mindset.

Be positive and affirmative about yourself. The energy you’ll generate with this upbeat attitude is highly infectious and he’ll be attracted to your good vibes.

The last thing a man wants is to be with somebody who’s always down on herself or regularly criticizes herself.

It generates an unhealthy atmosphere.

The thing is, all men know that all women have hang-ups about their bodies. But we don’t want to deal with your issues so early on in the context of our time with you.

It puts us off and makes us think if she’s like this now, she’ll be much worse in the future.

Next, focus on your appearance.

Dress well. Make the effort. Present yourself like your love-life depended on it.

The great side effect of looking good is that you feel good.

He will feel your confidence. And, personally speaking, I find confident women irresistible. There’s something about them that captivates me.

Splash out on some expensive perfume. But don’t ask your girlfriends for advice.

Ask your male friends what scent they prefer. I find that women often choose based on what they like, and forget that it’s the man they need to woo.

A confident man feels like he can take on the world and win.

Of course, this attitude makes you weak at the knees. But don’t forget that this has the same effect on the other women in his life too.

Now that you’re on his radar, you’ll have to employ this little trick if you want to know how to keep a guy interested:

Sow tiny seeds of self-doubt in him.

Now, you don’t want to obliterate his confidence – that would ruin everything.

But you do want to solidify your position on his map.

Make him feel that you are the best he can get.

Don’t be the first to contact him after you’ve slept together. This gives him the impression that you want him more than he wants you.

Don’t talk about your future together. He needs to think that you might have bigger plans than him.

Make him wait before seeing you again. Let him know that you’re not available for him as and when he chooses.

All of these combine to increase the perception of your value relative to his.

He’ll begin to think, maybe I’ve got something good here. Forget the other girls, this one has something about her. Why hasn’t she responded to my text messages yet? Maybe I’m not as good as I thought. I need to step up my game with this girl.

See how you can subtly influence his thinking?

Of course, how to keep a guy interested after sleeping with him is easy if you know how to push his buttons properly.

At this point in your life, you’ve already learned that men are driven primarily by sex and sexual pleasure.

Now, most women are no different, but men seem to be unable to control themselves in the presence of a woman who knows how to turn them on.

They’re rendered helpless, in a sense.

How can you learn to be that woman?

It all starts with getting into the mind of your man.

Pleasuring his body is easy – any woman can do that.

But learning the secrets of talking dirty to your man, getting him to open up to you about his most intimate fantasies, and making you a part of them, is the proven way to keeping a guy not only interested in you but addicted to you.

Now, this doesn’t involve becoming a slut or compromising on your principles.

Talking dirty is simply a method of communicating in a language that is guaranteed to make your man obsessed with you.

The good news is that you can learn how to incorporate this into your life and transform your sex life from standard to sublime.

So what are you waiting for?

5. Get him emotionally attached

Here’s where the real work begins. You can please a man sexually but how does that make you special?

There are plenty of women who can do the same. So why would he keep coming back to you?

But it’s not as easy as you might think. Many men, especially the ones who prefer a hookup to a relationship, don’t like to be tied down.

And if he senses that you’re getting the rope ready, he’ll run away before you can even get close to the first knot.

In order to make him like you emotionally, you have to get to know him in a way that doesn’t make your end game obvious.

In order to do that, start with his interests. Pay attention to what he loves to do in his free time and start having an interest in it yourself.

Impress him with your knowledge of the stuff he loves. Challenge his opinion and stimulate him with an intriguing conversation. But don’t overdo it – nobody likes an argumentative person.

It’s all about getting him to crave your presence when you’re not around.

Not even the best blow jobs in the world will keep a guy around if you’re boring in every other aspect.

You have to surprise him. Keep him on his toes. He should never be able to predict what you’ll do next.

Sure, you can surprise him with some dirty talk and new sex positions when you’re in bed together, but you can also order some pizza and wings to be delivered to his place when you know he has the guys over.

These surprises don’t have to be affectionate or romantic at all. If he likes it and isn’t expecting it, he’ll be intrigued enough to be interested in you even after you’ve had sex.

So focus on trying to see how many different ways you can surprise him. Keep him guessing and he’ll keep you around.

7. Tell him how funny he is

The truth is that, psychologically, people are more drawn to those who think they’re funny.

The more you laugh at his jokes and tell him how funny he is, the more he’ll keep you around. It’s like he wants you there for the ego boost.

You make him feel good about himself and so when he’s having a rough day, you’ll be the person he calls.

Think about it. If someone keeps telling you how funny you are and how great you are, wouldn’t you want to spend more time with them?

It works the same way for guys too. Laughing at his jokes and telling him how funny you think he is will go a long way in keeping him interested even after sleeping with him.

Just make sure to keep it genuine and not to go overboard or it’ll seem fake.

What makes a guy want to stick around even after the sex is over? Having fun with him.

When he has a great time with you, he’ll want to keep doing it again and again. It’s not like a guy to have fun with someone and then never want to talk to her again.

But that means you’ll have to up your game when it comes to being a good time outside of the bedroom too.

Show up to his place with his favorite comedy movie, a pizza, and beer. Tell him you’re having a movie night and spend the night laughing together.

Not only is it a nice gesture, but he’ll genuinely enjoy his time with you. The more experiences like this he has with you, the more he’ll try to make them happen again.

Some of the intrigue prior to sleeping with you is the fact that you’re a mystery to him.

He doesn’t really know you and that makes it a lot more exciting. In order to keep him interested in you for the long-term, maintain the mystery.

Be independent and have your own life. He doesn’t need to know every single detail about you or what you’re doing every second of every day.

Not only does that appear really clingy on his end, but it doesn’t give him anything to wonder about.

You want him to think about you and wonder what you’re up to when he’s not around.

In order to do that, you can’t give him your entire life story the first time you two spend time together.

You can even be coy when texting him. If he asks you something about yourself, tell him to guess or tell him it’s not that exciting.

Even if you say it isn’t, the fact that it’s a mystery to him will make it seem far more interesting than it really is.

You don’t have to hide your entire life from him, just don’t go around giving away every single detail so he has nothing to question you about.

The more he doesn’t know and the more he has to pry to get some answers, the more interesting you’ll be to him. And that means he’ll want to keep you around longer so he can figure you out.

This article is a good start, but if you really want to make your guy fall head over heels in love with you (and only you) you’re going to need a lot more than this.

That’s why I suggest His Secret Obsession.

It’s a complete, step-by-step guide that teaches women how to become the only woman in a man’s life… the kind of woman he can’t live without.

And how to do that just by using the power of your words. 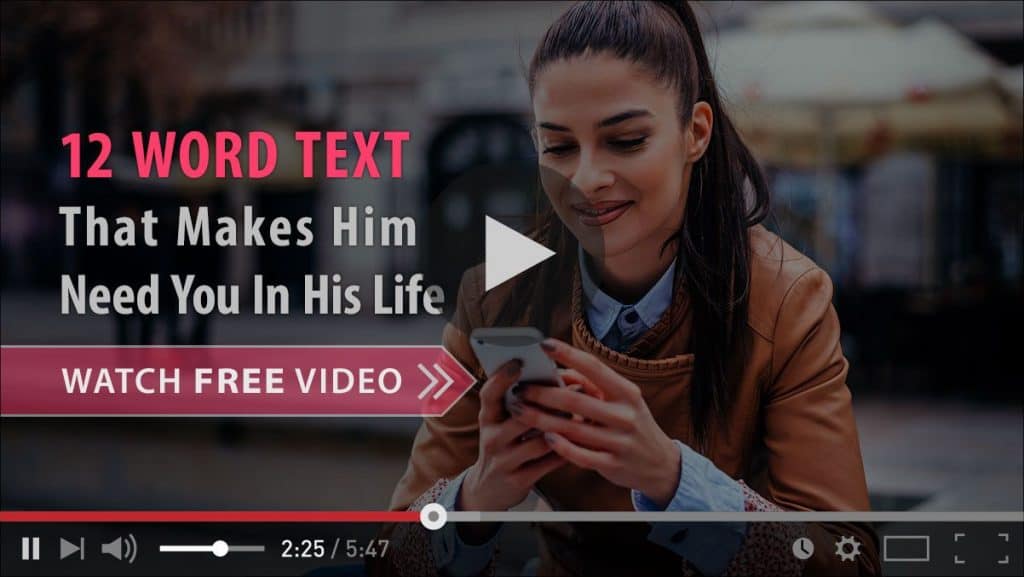 So if you want to get all the love, romance, and passion from your guy – and be the only woman he has eyes for – be sure to check it out.