How To Keep A Conversation Going With A Guy

You can’t have sex every minute you spend with the guy you’re dating.

Well, you could, but it’s unlikely to play out like this.

You’re going to need to be able to engage in meaningful conversation with him.

You need to get to know him, right?

But this is easier said than done.

How many distractions do we face each moment of the day?

But I’m going to help you. I’ve got 8 pieces of advice to share with you – one of which is going to blow your mind.

So let’s get into how to keep a conversation going with a guy.

Yes, I know we’re starting with the basics.

But this is fundamental to carrying on a conversation with anyone, let alone the guy you want to impress.

And there is a big difference between knowing you should do something, and actually doing it.

Next time you speak with him, notice how many times you interrupt him.

It doesn’t matter if it’s well-intentioned. You’re still interrupting him.

And nobody likes to be interrupted. (But if you do need to interrupt, at least learn how to do it politely)

You’ll be amazed at what happens when you allow each other to finish what you’re saying.

He’ll feel like you’re actually interested in what he’s saying, and vice-versa. The conversation becomes more of a dance than a battle to finish what you’re saying before the other butts in.

Focus On What He’s Saying 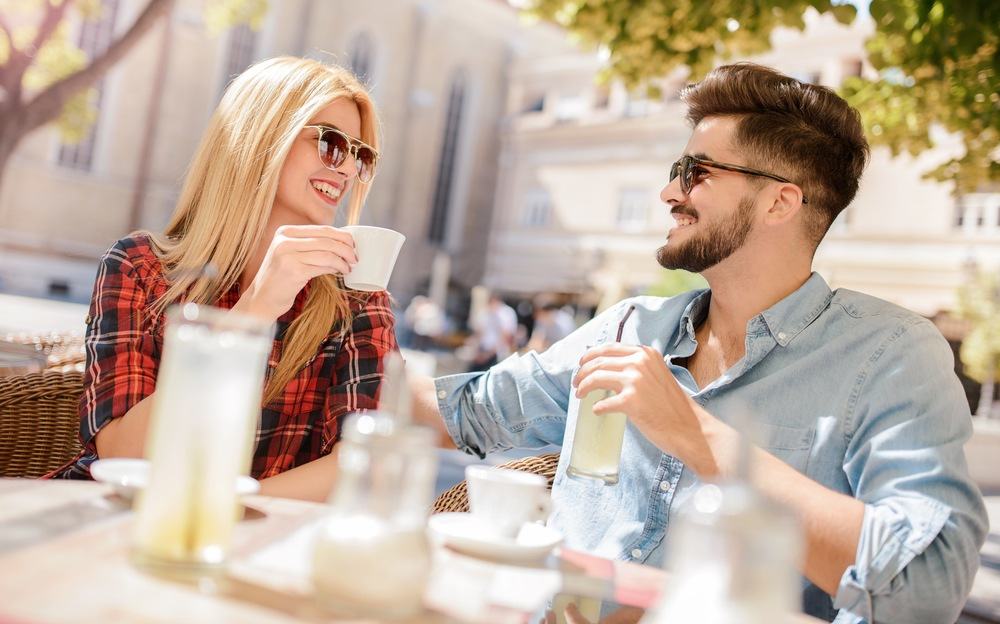 Concentrate on his words, the speed of his speech, the tone, and the volume.

Feel what he is communicating.

So much of our conversation is empty and meaningless for the listener because he or she is always thinking of something else while listening.

It’s no wonder that you suddenly encounter an awkward silence.

You’ve drifted away into your thoughts instead of listening properly.

If you want to daydream or ponder your thoughts, go out for a walk by yourself.

But for goodness sake, stop doing it in front of your man!

He can tell when you’re not listening properly and he finds it disrespectful.

Don’t Let Yourself Get Distracted

I was out on a date with a pretty girl.

She was nice to look at, but her conversation was lacking.

I could have managed that – I mean, some people take a while to open up.

However, I couldn’t manage how she took out her phone to check it every time it buzzed.

I politely asked her twice to put it away. And when she did it again, I simply got up and left.

Now, maybe I’m a little less accommodating than you, but I believe that if you let people disrespect you, it’s your fault when they do it repeatedly.

Put your phone on silent, or, even better, airplane mode. Give your man your full attention.

Make a lasting impression and separate yourself from the other girls he’s dating.

Sometimes you’ll experience a pause during the conversation.

And that’s ok. Silence can create a little positive tension.

Silence also shows that you’re both comfortable with each other, and don’t feel the need to force the conversation.

Yet you don’t want too many pauses in your discussion.

Be sure to keep 2-3 questions in your mind to use when you feel the silence has gone on long enough.

Luckily, we’ve created some great open-ended questions for you to use.

Spin-Off Into Other Topics

If you’ve managed to follow our advice up until now, you’ll find this tip really easy.

And you’ll use it in combination with a great phrase:

You mentioned [insert what he said] earlier. Tell me more about that.

It shows that you were listening to what he said, that you still remember it, and, even better, you are interested in hearing more about what he has to say about it.

It’s not just guys who love to talk about something which they know their girl is interested in hearing about.

You can use this one on everybody.

Remember, people love talking about themselves.

When your eyes lock with his, powerful sensations can flow through his body.

He sees and feels that you are fully engaged with him.

He knows that, at that moment, he is the most important thing in your world.

This makes him feel powerful and respected.

With strong eye contact, you are also showing him your confidence. Being afraid to look somebody in the eye is a sign of weakness.

But be careful not to overdo it. A man should hold his gaze longer than yours, as a sign of his dominance.

Whatever you do, don’t attempt a staring contest.

Position Your Body Towards His

Similar to #6, use your body to let him know that he has your full attention.

If you’re facing away from him, or you’re leaning away, he’ll pick up on these cues unconsciously.

The conversation will naturally stall if he feels you’re not interested.

Most guys hate the idea of talking too much and boring a girl.

If you demonstrate a lack of interest based on your body language, he’ll worry he’s boring you.

And the conversation will crash and burn.

Get Inside His Head

I’ve saved the best for last.

If you really want to know how to keep a conversation going with a guy, you’ve got to learn how to get inside his head with the proven Wrap Him Around Your Finger program.

It’s a guaranteed method, based on the experience of a renowned therapist who spent years helping women just like you with relationship issues.

The truth is, every advice point above is blown out of the water with this secret knowledge.

So if there’s one thing to learn from this whole article, you need to visit their advice page for the information which will change your way of dealing with guys forever.